Ideas to improve the site

According to the Area51 page for Portuguese Language Stack Exchange, we need to improve some things here: 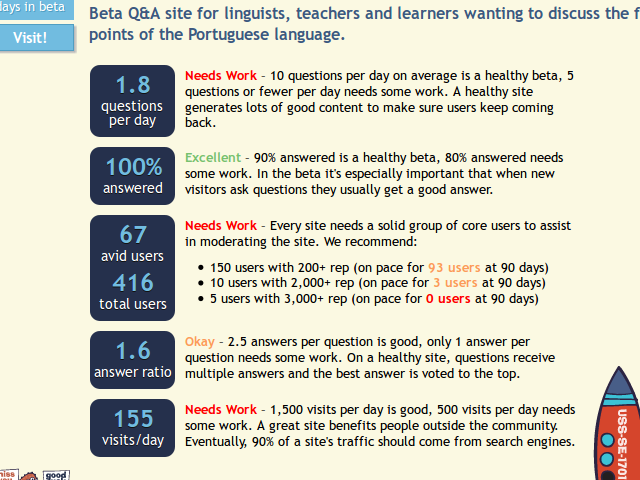 So, I'm open this discussion to get ideas to get it done.

Here are some ideas:

Create a task force to apply some SEO techniques to attract more users to the site from search engines.

I did not see it in any of the other language sites of Stack Exchange, but the idea is to create some questions that work like "courses to learning Portuguese". For example a question for explain verbs and so on. I know this strays a bit from the Q & A format, but it is an idea under construction, we can do something!

Your screenshot shows five metrics. Voting directly addresses one of them: it increases the number of "avid users."

But that's just a small part of the picture. Voting also encourages good contributors to keep contributing, which drives additional content (both questions and answers) and ultimately traffic as well. Thus voting also indirectly contributes to the other metrics.

Right now only 3 people have the Civic Duty badge (300+ votes) and just 15 have the Vox Populi badge (40 votes in one day). That's out of 112 who have answered a question, and 266 who have put something in their "About Me" section of the profile. We can do better!

In the words of Jeff Atwood:

Voting is as crucial to our community as it is to any democracy. As a moderator, or merely a citizen of the site -- please exercise your right to vote by voting early and voting often!

I use other language SE sites (specifically German SE) and one difference I noted is that there seem to be a lot more questions written in English in that site. Using my own experience in German, I can speak it as a foreign language, but writing is much harder. In German there are so many rules and declensions to be aware of when writing a grammatically correct text that I find it easier to ask questions in English. I think the same applies to Portuguese learners, it would be easier to write questions in English (any non-native Portuguese speaker can confirm that?) and even for our question/answers to show up on Google.

As English is the de facto language for internet I think we should strive to write more (interesting) questions and (good quality) answers in English. That should bring more visitors from search engines and that is the main point we should develop for Portuguese SE to survive the Public Beta phase.

I've noticed that Portuguese SE's SEO is currently not so good. With some searches using vague terms, i.e. without including "stackexchange" or anything closely related to Portuguese SE in the search, it rarely appears on the first page. The first page is 99% of times sufficient to the user and there's a 1% chance that the user goes to the second page, and even less to go to the third, and so on.

Here I list some searches and the page in which Portuguese SE appeared:

Out of 20 searches, in just 7 of them Portuguese SE was on the first page, in which 5 out of these 7 needed narrowing.

One of the things to do so it could get a bit better is making the question title and body more "search engine friendly", i.e. adding keywords in them, like, for example, "diferença" or "difference" to "word-choice" questions (with proper context, not just throw a bunch of words nonsensically). This boosts Google's relevance rate to Portuguese SE pages, as is noticeable in the tests above.

But what's the point of all that I'm saying? The point is that the more Portuguese SE is noticed by search engines, the more people will notice and access it, increasing the visits/day, and consequently boosting the results priority for Portuguese SE, and consequently being noticed by more visitors, and possibly them getting interested in joining and/or asking questions, and that way increasing the questions per day.

Another way to increase users/visitors is the good ol' spreading of the word about Portuguese SE, be it for friends or the public.

Also, in order to increase the users reputation, votes are never too much, as this user with his answer with it's 24.000+ upvotes can say very well, lol XD. Ahem. So the focus, at least for now, should be the low rep users, but don't just upvote any answer/question like crazy. If an answer is well written and correct, and a question is interesting or well written and upvotable (i.e. not homework, "where do I start", etc., questions), upvote it with no mercy.

These are far from being miraculous solutions, but if they help, AWWW YEAH, no doubt!

Since this site is intended for

linguists, teachers, and learners wanting to discuss the finer points of the Portuguese language,

and apparently most of the users are neither teachers nor linguistics, we shoud try and attract them. 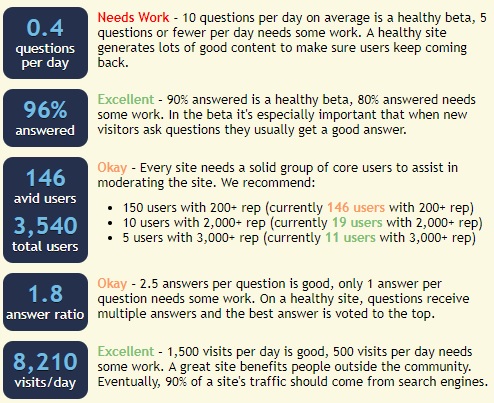 (i) Might sound obvious, but promoting discussions using social networks and alternative channels is probably the surest path for recruiting novel users. Relevant note: I understand many users at SE hold aliased profiles in a number of SE communities wherein they'd prefer to remain anonymous. For these users, I'd encourage re-defining privacy settings as to hide these parallel affiliations from their profiles, and help promote question discussions online.

(ii) Avoiding flooding the comments area with chatty remarks is a recommendation I'd encourage here. I am a user of some other SE communities, and other Q&A websites aimed at sharing knowledge and discussing facts. My recent contact with this specific SE website is that comments too often include conversation posts, and others challenging the questioner or answerer into some imperious debate. This is a bit discouraging in Q&A websites, where most visitors seek specific information and not "yet another online dispute".

(iii) I do not know how to achieve that, but I think this community would greatly benefit from international contributors who are native speakers of Portuguese. I understand Brazil is by far the greatest of such nations, but some diversity would surely add a lot of colour to ongoing threads.

Not the answer you're looking for? Browse other questions tagged discussion beta .

This site is for discussion about Portuguese Language Stack Exchange. You must have an account there to participate.

21
Who will be our target audience when the site is launched?
22
Accepting nominations — Who should moderate this site?
6
How is “questions per day” calculated?
7
Length of answers
8
Is this recent question about job post semantics on-topic?
5
Why the recent spike in the number of questions?
6
Should we split some questions in two?
17
Happy birthday — taking stock of our first year